Rio Rancho at the beginning of a boom

Just two years after the launch of Springer 5 Investments, Jeanie Springer-Knight is stirring up excitement about the anticipated boom in Rio Rancho. And Springer 5 properties are poised to benefit from all the activity. More details follow.

Rio Rancho at the beginning of a boom

Jeanie Springer-Knight, a partner is Springer5 Investments, has become a driving force behind recent developments in Rio Rancho. But the growth the city has seen in recent months is only a precursor to the explosion Springer-Knight is anticipating.

What attracted you to development, and how did you get into the business? 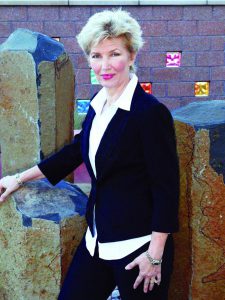 My father had entrepreneurial DNA, and he saw it in me. He built his own construction business and later became highly successful in acquiring and selling land in Rio Rancho. He envisioned the significance of the Unser/Westside intersection before the two roads were even paved. Four years ago my brother, Eric, and I began working with my father. We started Springer5 Investments and began new careers as developers.

You have a special interest in Rio Rancho. What do you see happening in that area during the next five years?

Growth — explosive growth — especially along the Unser Gateway. Unser and Westside is shaping up to become one of the busiest intersections in Rio Rancho. It started with Presbyterian Rust Medical Center’s announcement of an $80 million expansion, three years ahead of schedule. Unser Pavilion, Springer’s retail and medical plaza, followed by leasing 75 percent of its space in 18 months. The medical/patient care facilities are moving in, too.

Just like the hospital, each new business is reporting greater volume and sales than expected. And this is just the beginning. The most recent announcement involves transforming Westside Boulevard into an employment center corridor. Work. Live. Play and stay in Rio Rancho. That’s our vision; that’s our plan.

What keeps you doing what you do?

The people and the progress. As private stakeholders, it’s easy to be motivated by elected officials and city staff who are now focused on playing offense rather than defense. Add to that, the newly launched Sandoval Economic Alliance promises regional collaboration in its efforts to anchor a vibrant and competitive economy for the area. It’s a very pro-business climate. But what’s even more impressive? The numbers of people coming forward, ready to give their time and talent to help us advance this vision. In six to nine months, we’ll have a full picture and marketing plan for a new Unser Gateway community.

What’s the best piece of business advice you ever received?

“If you love what you do, you’ll never work a day in your life.”

I haven’t been ‘working’ since I began developing in Rio Rancho. It’s challenging but incredibly rewarding, and a lot of fun, too.

But I’m grateful to my 25-year career in corporate America, where I gained the skills and confidence to go it alone.

If you weren’t doing what you do, what career would you like to have?

Following my work on the Unser Gateway, I hope to pursue a final chapter in my career and become the mayor of a small town! Nothing the size of Rio Rancho, but I’m witnessing first-hand the best way to run and build a city.

What lesson have you learned on the job that is contrary to what you were taught in school?

Women can achieve anything they put their minds to.

But women, working with other women and men, are more likely to achieve the extraordinary.