The Rio Rancho Observer has created a handy and colorful map of all the recent activity in the Unser Corridor, or the Unser Gateway, as we like to call it. Check it out!

Rust has budgeted $86 million for the six-story tower. The construction project employs 50-100 per day through fall 2015.

Construction started for Rio at Rust, a skilled health care facility, in January. The $10.5 million, 51,000-square-foot project, just south of Wellspring Avenue and Unser, will open between November and January, according to material from Matt Geisel, business relations & CVB manager for the City of Rio Rancho. 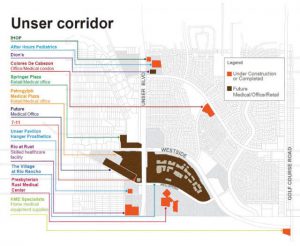 That facility will remain open around the clock, employ 120 individuals, including physicians and nurses, and provide therapy services.

The Rio Rancho Planning and Zoning Board on Tuesday approved a 4,504-square-foot 7-Eleven store, just north of Wellspring and Unser, on 1.26 of the 19 acres set aside for the Petroglyph Medical Plaza, which will eventually contain 60,000 square feet of Class A medical office space.

Additional construction has started at Unser Pavilion, between Rio at Rust and the plaza. Phase 1, already completed, included Einstein Bros Bagels. Phase 2 will include the Hanger Patient Clinic, opening in October, according to Jeanie Springer-Knight, a partner in Springer5 Investments.

Cabezon Commons, at Cabezon Boulevard and Unser, already features After Hour Pediatrics, which opened recently. A 5,300 square-foot Dion’s restaurant will open in the fall and employ between 65 and 70 people. About half a mile east, medical office space at Colores De Cabezon has already opened.

The Village at Rio Rancho, proposed for 65 acres across the street from Rust, remains preliminary, according to Geisel.

“We are excited that the developer is starting to make plans for the next steps in the project,” he added.

HME Specialists, which sells medical equipment and supplies, will open soon at Westside and Golf Course Road, an intersection that falls within the boundaries of Albuquerque.