After the passing of their father, a decades long investor in Rio Rancho, siblings (and partners in Springer 5 Investments) Eric Springer and Jeanie Springer-Knight pick up the torch and move forward into Rio Rancho’s bright future. If you want to know what Springer 5 is all about, read on!

It all began with Franz Springer, a spread of vacant land and some foresight.

Springer was a commercial contractor who purchased raw land in Rio Rancho’s Unser Boulevard corridor before development in the area had begun to progress and before interest was significant. He had founded Springer Construction Co. in the 1960s in Albuquerque and then began strategically building, buying and developing on land in both Albuquerque and Rio Rancho. 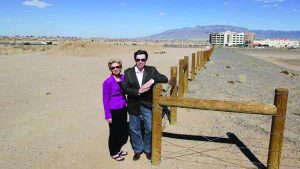 Springer died in 2012 at 84, and that’s when his children picked up the torch and began building a legacy for their father.

His daughter, Jeanie Springer-Knight, and her brother, Eric Springer, have been working on Rio Rancho projects under Springer5 Investments since 2012. The first two developments are Unser Pavilion and Springer Plaza (see story, page 6 for more details).

Springer-Knight said her father taught her everything she knows about development and gave her many industry connections. From the beginning, she said, she had no plans to be a silent partner in Springer5.

Since her father’s passing, she has researched who the industry leaders are and has looked at what makes the development community tick, she said. She has also spent a considerable amount of time trying to understand how Rio Rancho government functions, specifically in the spaces of zoning and planning.

Springer-Knight has emerged as an organizer for the Rio Rancho real estate and development community through it all.

“The momentum we’re seeing in Rio Rancho is contagious,” she said. “The energy is coming from city and county leaders [who are] stepping up in total support of the development community.”

Springer-Knight said the city and county support has allowed her to attract out-of-state investors to Rio Rancho again. “[The investors] are at the table, asking all the right questions. It feels very collaborative, and we share a high sense of urgency,” she said.

Springer-Knight and others are touting key projects that have come to fruition in the past few years in Rio Rancho as well as several others that are in the pipeline. (See cover story, pages 4-6). She said work teams have been structured and it’s allowed for easier planning and execution for developers like her.