Want the Big Picture perspective on Unser Gateway? Springer 5’s Jeanie Springer-Knight lays it out project by project. Yes, we truly have a vision for Rio Rancho’s boomingest corridor—and we’re just getting started. Read more in this article by Damon Scott in Albuquerque Business First:

Take a major thoroughfare, vacant land, motivated developers and add in a massive anchor and you’ve got a corridor in Rio Rancho that continues to boom.

The artery is Unser Boulevard — a large stretch of it recently branded as the Unser Gateway — running from the edges of Albuquerque at the HME Specialists new complex at the corner of Golf Course Road and Westside Boulevard and continuing north to After Hours Pediatrics near Cabezon and Unser Boulevards. And there is a medical theme to it all — Presbyterian Rust Medical Center is the corridor’s huge and expanding anchor. 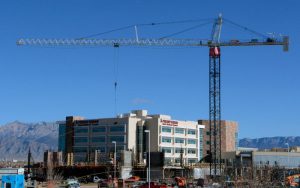 Take a major thoroughfare, vacant land, motivated developers and add in a massive anchor and you’ve got a corridor in Rio Rancho that continues to boom. Construction crews are hard at work at Presbyterian Rust Medical Center in Rio Rancho. The hospital is undergoing a major expansion along the Unser Gateway.

A new $80 million patient tower is rising at Rust — where you’ll see one of the only construction cranes in the Albuquerque area at work. The expansion is set to be completed this year with more projects in the pipeline for the hospital in Rio Rancho and in its Downtown Albuquerque location.

Jeanie Springer-Knight, of Springer5 Investments, is one of the area’s most active developers and is considered the spark for the corridor’s branding and a coalescing of stakeholders in the public and private sector. Springer-Knight has property and land along the Unser Gateway — Unser Pavilion and Springer Plaza — and says she sees a bright future for Rio Rancho in both commercial and residential projects.

The following are projects Springer-Knight says, along with Rust, will continue to spur new development along the corridor in the coming months.